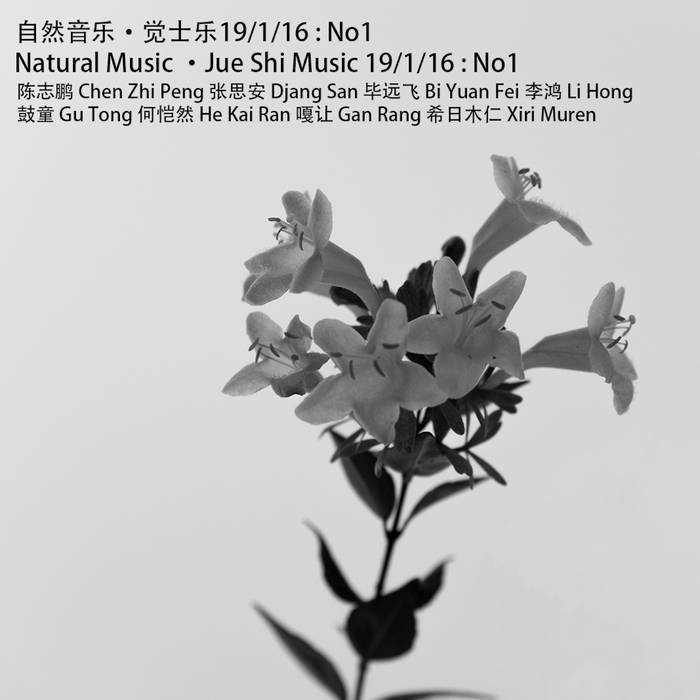 Recorded in Beijing in January 2019, this album is a collaboration in between several artists living in China. The music is improvised under the concept of "Natural Music" developed by artist Chen Zhi Peng.

Apart from Djang San (playing Zhongruan here), here are the artists on the record:

Born in a family heavily involved with art and education, he grew up in a literary environment studying Eastern and Western art from an early age. He has participated in and promoted the development of folk songs, world music, cross-border culture and art in China.

He has been engaged in the research, creation and education of natural music art, and established the “Natural Music Center”, the “Music Sound” cultural communication, and the “Nature Perception”, a Chinese brand that promotes natural art and culture, natural parenting, and nature education. For many years, he has advocated and practiced the inheritance, creation, communication and cooperation of ancient and natural musical instruments. He has starred in domestic and international art films while also having created and produced music for film and television. He has been working with many of the world's nations, world music and diverse arts for many years and is regularly invited to exchange on natural music art and culture around the world.

In charge of percussion for the "Natural music culture" concept.

He graduated from the Art College of Inner Mongolia University and worked in the Cultural and Art Corps of the Mongolian Military Division of the Beijing Military Region. He has formed the Geer band, the Dewuhe band, and has cooperated with poet Mo Xizi, Lvxingzhe band and others.

He has a great ability in expressing emotions with rhythm with a unique insight into percussion. He agrees that, "life is a process of cultivation and drumming is also a process of self-care. I love natural music, to listen to the natural vibration frequency of the drums rhyme and to let the rhythm of the drums and the earth resonate with each other."

He's a percussionist from China's first generation of drummers.

"When I was a teenager, I studied percussion at the Beijing Children's Palace Symphony Orchestra. At the age of 20, I began to learn drums.

After 1995, I created my own company to develop electronic drums. In 2003, I began to learn to promote African drums and other percussion instruments."

"In 2006, I began to study the use of environmentally friendly materials to make African drums until now. At the same time, I also studied synthetic materials to make Djembe drum skins, simulating the sound effect of animal skin."

In 2009, he formed the band "Hoochie Coochie Gentleman" and served as a drummer. In the same year, he registered his own African drum brand "Zebra Djembe". In recent years, he has mixed the art of multi-world root percussion by integrating it into the concept of "Natural Music".

Director of the Instrument and culture department for the "Natural Music Sound" company.
Player of percussion and wind instruments.
Has established the earliest African drums orchestra in Beijing.

In 2017, after moving to Dali for more than ten years, he began to study the ancient Chinese harmony system and serves now as the director of musical instrument production for the core team of the "Natural Music" concept.

He Kai Ran has studied orchestration and percussion at the Conservatory of Music in China.

He has participated in the 4th National Percussion Competition while he was still studying and won the gold medal in the professional category, which got him to win several scholarships.

On June 14, 2013, he successfully held a solo percussion solo concert.

Born in 1975 in Ningxia Hui Minority Autonomous Region, Gansu Province.
Studied painting at the Northwest University for Minorities in 1999.
Came to Beijing in 2001
In 2007 also that year, he began to organize his folk songs.

He Graduated from the Music Department of Inner Mongolia University Music School in 2015, specializing in Matouqin performance.

20 years of music in Asia. More than 50 albums, China Battle of the Band winner, Pipa and Zhongruan re-inventor, "guitar anti-hero", strange poet, thinker when he can think.

Bandcamp Daily  your guide to the world of Bandcamp

Featuring appearances from Kari Faux, Bluestaeb and and interview with NY-bred artist Wiki